Recommendations for the Next Mayors in Major cities, by Joe Estrin 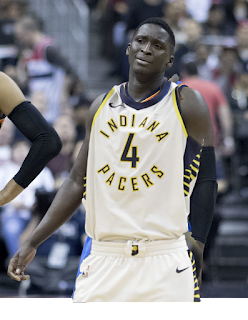 With Paul George’s return to Indianapolis successful with a close win over the Pacers, the Mayor of Indianapolis announced that the city is ready to announce a new mayor, Victor Oladipo. Oladipo, a Maryland native, joined the Pacers this offseason as part of a package deal that sent Paul George to the Thunder. This was thought to be a deal that would send the Pacers in a downwards spiral. Instead, the Pacers are the 5th seed in the East and the Thunder are the 8th seed in the West. With Oladipo ready to be named the next mayor of Indianapolis, let’s look at some other cities that are due for an upgrade.

Boston
The current mayor of Boston, Marty Walsh, was elected to office in 2014. With his minimal participation with the Celtics, there needs to be a change in mayorship. I would nominate Danny Ainge, the current General Manager of the Celtics. With his cunning ability to get deals done, there is no question that Ainge certainly has the talent to be the mayor. He was able to get high drafts picks and negotiate deals that always seems to favor him. His ability to make the Celtics relevant again, he is a fan favorite and I’m sure that he would be able to win the popular vote in Boston and be a great replacement for a disappointing Mayor Walsh.

This one should be a no-brainer. Not only is Lebron James the second coming of Jesus Christ, but is the perfect candidate to replace Frank G. Jackson as mayor (see Lebron James: The Second Coming of Jesus Christ). For everything that Lebron has done for his home state of Ohio, the fans should have no trouble electing him to be the new mayor. He has done everything from building a new school for Akron to bringing the first NBA championship to Cleveland. His accomplishments are second to none and Cleveland is overdue for a new mayor since Frank G. Jackson has been in office since 2006. In 11 years of being in office, I cannot think of a single notable accomplishment that Mayor Jackson has done for the city of Cleveland.

Not only are the Grizzlies one of the worst teams in the league, but the city needs more attractions than Elvis Presley's old home. One way to do this is to vote for a new mayor. Even though Jim Strickland was elected in 2016, he has not been able to approve from the postseason woes of last year. Although it is early to say that the Grizzlies will miss the playoffs, being in last place does not help their chances. My nominee to for the new mayor is David Fizdale. As a rookie coach last season, not only did he lead the Grizzlies to the playoffs, as any good politician, he provided us with great sound bites like “They not gonna rook us!” Fizdale would be able to improve not only the team, but also the city. As a fan favorite, he would easily beat out any candidate that would dare challenge him. Take that for data!

With everything happening earlier this year with the hurricane and the flood, Houston is in need for a change. I would suggest J.J. Watt. The defensive end for the Texans, Watts has roots in Houston. He raised money for hurricane relief and has one of the highest selling jerseys in the NFL. He obviously has the knowledge to navigate economic issues which makes him a solid candidate for mayorship.

Charlotte was under fire last year when they were stripped from hosting the All Star Game because of the transgender laws. Jennifer Roberts, the current mayor, did not have a response to this and city of Charlotte was outraged. Because of this lack of action, there needs to be a change. J. Cole gives the city the opportunity they deserve. He has always been an avid fan of his home state and being named mayor would be a great choice for the city of Charlotte. He is not afraid to call out his opponent when he thinks they are wrong, like he did in his song Everybody Dies. With his confidence to call people out, he would do just fine as a new mayor.

The current mayor of New Orleans, Mitch Landrieu, has been in office since 2010. When he was first elected as mayor, the Pelicans were known as the Hornets. Besides the change of a horrid team name to an amazing one, Landrieu has failed to participate in any sort of sports activities. I would say that Demarcus Cousins should run for mayor and challenge Landrien. Boogie has never been afraid to express himself and has found himself heated on the court, which is a sign of a passionate politician. As mayor, he would have a hard time leaving the Pelicans, which would mean more glorious years of an Anthony Davis and Demarcus Cousins frontcourt.

LaVar Ball is possibly the most important person in sports right now. He just had his two younger sons, LiAngelo and LaMelo sign for a Lithuanian team. This shows that he has quite a direct foreign policy agenda would is good for such a diverse city like Los Angeles. LaVar and Donald Trump had their own Twitter battle which shows the kind of connections he has. He also has a strong pull inside the Lakers organization and maybe we will get to see all three Ball brothers on the Lakers, a promise he has made on several occasions.

As a diehard Wizards fan, it would be easy for me to just point to John Wall and ask him to replace Mayor Bowser, but he would not be an ideal candidate. Last postseason, he flashed a gang sign, which would not bode well for the mayor of the nation’s capital. Instead, I would nominate Samuel L. Jackson, who was born and raised in Washington, D.C. He would be a good challenge for Mayor Bowser, who has failed to launch a D.C. statehood campaign. With Samuel L. Jackson’s melodious voice and his constant appearances in Capital One commercials, he has the ability to make great speeches and is very economically smart, two tools key for any politician.

Kevin Durant would make a great politician. Since he has been known to put his self-interests before everyone else’s (his move from OKC to Golden State), he has the exact kind of skills to thrive in the political field. He is very sneaky and has the ability to attack other people and not feel any sort of remorse, kind of like a snake. His one major flaw is that he is soft and similar to a cupcake. This could potentially hinder his ability as mayor. The current mayor of Oakland, Libby Schaaf, has not gone through the same experiences that KD has. KD has experienced the worst of the worst in our society, blowing a 3-1 lead, whereas Mayor Schaff has never gone through that kind of trauma. So I ask you, people of Oakland, don’t you want a mayor who has really seen the worst in our society?

I could go on about new mayors but these cities seem to need them the most. The one thing all of these recommendations have in common are their uncanny political skills. From good negotiation skills to unreal public speaking ability, my recommendations for new mayors would be beneficial for these cities.
Joe Estrin Lifestyle