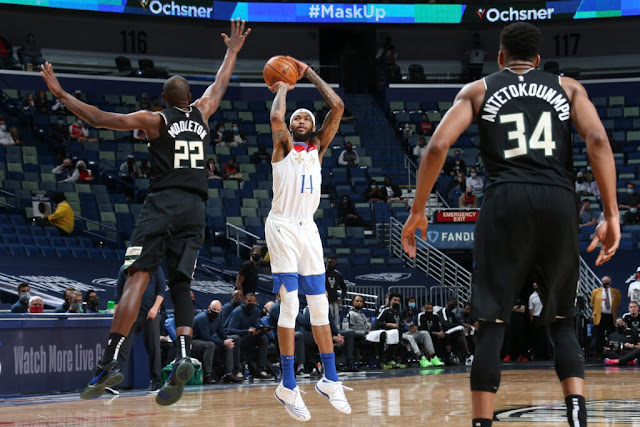 1. Quarter 1, 7:03. After Time out, Bucks Possession
Bucks run an after time out play to get the offense going
Context: The Bucks were down to a team they expected to come out strong against. They were looking to involve their star player and get him going.
What happens:

The play begins with a Lopez pindown for DiVincenzo. This action isn’t intended to create a scoring chance, but it gets the offense moving and keeps the defense on its toes. DiVincenzo comes off the screen and immediately sets a wide pindown for Giannis, who flows into a P&R with Holiday. They probably hoped to get Adams out of position with the early movement and score an easy Giannis bucket. Once they initiate the pick-and-roll, though, Holiday notices Bledsoe helping all the way into the lane on the Giannis roll, so he flips it out to Augustin.

Bledsoe recovers quickly, and either because of that recovery or because he’s not supposed to shoot on after timeout plays, Augustin drives to the rim, but Bledsoe bodies him enough so that he can’t get directly to the rim.

Here is where the defense makes the mistake (or, more likely, their strategic concession to guard the rim). Ingram commits hard to help on Augustin and close off his shot attempt, Zion commits hard to help Ingram and stop a kick out to the corner, and Lonzo has to come deep into the paint to help Zion by guarding a Lopez run at the rim for a dunk. Lopez recognizes this, and pins Lonzo with a screen, freeing Holiday for an open three-pointer. The Bucks don’t get their star going out of the timeout, but they improvise smartly and find an open three off of a great pass from Augustin.

Not sure if this was a case of proper execution of Stan Van Gundy’s schemes designed to protect the paint above all else, or a case of overhelping.

Context: The Pelicans have been on a run, and they’re looking to continue the easy scoring opportunities. The Bucks have just stifled a fastbreak, so Lonzo pulls it back and looks for a Zion isolation.

Zion Williamson is a prolific scorer — which is an incredible achievement considering he has essentially one reliable move (other than a dunk): a lefty lay-up. But the fact that he has that one lethal move means he inherently has a second lethal move: the fake lefty layup. Here he uses it three ways in one short isolation possession.

Before receiving the ball, Zion does a fake spin. This spin is a move he does regularly to seal his defender, catch a lob, and use his extraordinary second bounce to put in an easy lay-up (or his extraordinary first bounce for an alley oop). In this instance, though, he fakes the spin to keep Portis on his heels, and returns to post position to receive the ball.

After receiving the ball, Zion faces up against Portis. From here, Zion goes to his signature, the jab-step to his left-hand side. Portis bites, because if he doesn’t, Zion will score by driving to his left.

Zion takes advantage of Portis’s shift by driving to his right, toward the middle of the lane. When he does this, though, help defense comes from the weakside from both Connaughton and Craig — in combination with Portis recovering back from his initial bite on the fake, the Bucks have three people watching Zion. But Zion has another counter here…

Again, Zion fakes left. With a half spin, he makes Portis commit, and convinces Connaughton and Craig they don’t need to help. With all three defenders now moving away from the lane, Zion goes back to his right, finds open space, and — get this — still finishes with a lefty lay-up.

Zion is dangerous enough that he can move defenders with just the slightest fake, which is part of why he is so efficient in the paint. It was on full display on this possession.

Context: The Pelicans are building up a sizable lead, and the Bucks are having trouble attacking the rim and creating easy offense due to the Pelicans packing the paint and playing drop coverage on Giannis pick-and-rolls.

Khris Middleton and Giannis Antetokounmpo open up the possession with an empty corner P&R. Since the weak side is empty, help defense here has to come from the strong side, which is why we see Bledsoe in the paint. Lonzo collapses in to help at the nail and prevent a drive down the middle of the lane. Middleton senses his help and passes out to Lonzo’s man DiVincenzo, but Lonzo is able to tip the pass.

Despite Lonzo’s tip of the pass, DiVincenzo takes the ball and uses Lonzo’s momentum against him, driving past him to the middle of the paint. Because DiVincenzo may have an angle at the rim, Bledsoe steps up to help on the drive, leaving Holiday in the dunker spot.

Due to the Pelicans’ heavy paint protection focus on defense, Melli collapses in to guard Holiday and prevent a layup attempt. Jrue seems to be a step ahead of Melli, catching the pass — and without even a pause to think — spinning in mid air to fire a pass to the now wide open Lopez in the corner, who drains the three. Heads up play by both DiVincenzo and Holiday.

Context: The Bucks have made an incredible run to cut into the Pelicans’ lead. The Pelicans are looking for consistent scoring from their go-to guys, hoping to extend possessions and ride out their lead to the finish.

Any analysis of this game would be incomplete without acknowledgement of Steven Adams’s stellar impact for the Pelicans, which was fully evident on this play.

Adams is often a means more than an end on offense; he helps others score, but doesn’t look to score unless the opportunity is too great to pass up.

Here, Bledsoe and Zion are running a pick-and-roll at the top of the key, with shooters spacing in the corners and Adams lurking in the dunker spot, spacing as best a non-shooter can.

The Bucks switch the Zion/Bledsoe pick-and-roll, leaving Bledsoe covered by a sagging Bobby Portis. Bledsoe, feeling it from deep on this particular night, takes this opportunity to shoot an open three. Holiday, meanwhile, on the switch, has boxed out Zion, an elite offensive rebounder, hoping to prevent any second possession for the Pelicans. And he succeeds…almost.

Giannis is busy ball-watching as Adams tracks the rebound. Holiday has sealed Zion and grabbed the ball, but Adams comes flying in, wanting it more, and securing the rebound. He dribbles out to the three-point line as he is gaining possession, and hands it off to Hart, who for some reason fires up a three pointer.

After this shot, DiVincenzo does his best to put a body on Adams, but Adams’s effort on the glass is too overwhelming as he races past the box-out. Giannis is in perfect rebounding position, he’s not ball-watching this time. He even notices Adams charging in and attacks the ball in the air. But Adams is too quick, his effort too much. Giannis can only tip it out of bounds, as possession stays with the Pelicans.

Adams finished the game with only four points, but his impact was felt in his 10 offensive rebounds. These extra possessions were key for New Orleans, hoping to retain the lead that the Bucks were chipping away at ferociously in the second half.

Side note: Adam’s statline of 10+ offensive and defensive rebounds to go with under five points hasn’t happened since 1999. Per basketball-reference, there have been 12 such games since the merger, and seven of them were Dennis Rodman. Of course.

Context: The Pelicans are doing their best to fend off the Bucks. Milwaukee’s elite shotmaking has brought the game close, and the Pelicans need to generate good shots to finish this game with a win.

Sorry, I didn’t finish my sentence. Zion Williamson can fit next to a big like Steven Adams on offense, and this play is an example of how.

It starts with a similar alignment to play number four, except here the pick-and-roll at the top of the key has Lonzo ball handling, again with shooters in the corner and with Adams lurking on the opposite block this time.

The Bucks switch the pick-and-roll like they did last time, not allowing Zion to catch the ball moving toward the basket. The Pelicans pivot here, with a swing to Ingram on the wing as Zion establishes post position.

Zion has a clear-out on the left post, and immediately gets down to business. Zion moves Connaughton out of the way with a jab and gets to the middle of the paint, collapsing the defense.

The defense converges onto Zion so closely that even Giannis, who was under the rim watching Adams, has stepped in to stop Zion from getting in the air and finishing.

Zion comes off a spin move anticipating the collapse from Giannis, and unselfishly dishes the ball to Adams for a wide open lay-up.

Brief Aside: This play is a great example of how Steven Adams can be an effective partner to Zion Williamson on offense. It’s easy to look at this set-up and think that Adams is clogging the paint by bringing Giannis under the rim. And it’s true, Adams can’t space from the three-point line. But even if he were an effective shooter, waiting in the corner, I think Giannis would still be lurking about where he is in the paint. All Adams needs to be able to do is still be a scoring threat, which he is here. On Zion’s drive, at 2:37, he has a clear angle to dish the ball to Adams for a layup or dunk attempt on Giannis. After Zion doesn’t pass, and allows the defense to collapse further onto him, Adams smartly moves behind to where Giannis can’t see him, toward Zion’s favored left side where he knows Zion will be able to find him. Zion hits him with the easy pass around Giannis, and Adams scores easily. Plays like this not only provide effective scoring in the paint, they also help Zion develop as a passer, learning to keep his eyes up as he attacks the rim. In a developmental year for the Pelicans’ young stars, Adams is extremely valuable.

Having watched a second time, I still don’t know how the Pelicans won this game, outside of the obvious nailing 21 three pointers, a season high. But I hope these five plays showed some glimpses into things both teams did right. Zion commanded help every time he touched the ball, and that opened things up for the rest of the team. Hopefully they can continue to capitalize on those openings by hitting their outside shots. Also people who speak ill of Steven Adams are my enemies. 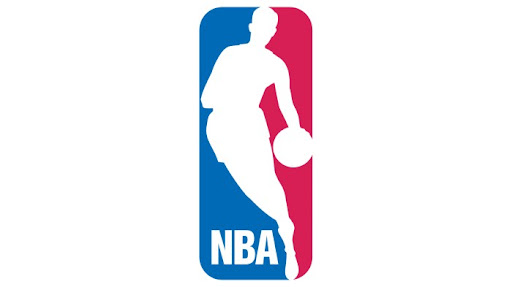