Luka Dončić is Good at Things, by Sam Butler

You ever meet someone who seems to win at everything? You make up a competition — i.e. ‘Hey, who can throw their can into the trash?’ — and they win every time? They have an indescribable knack for being good at stuff, and it doesn’t matter what it is? They may not even be the best at whatever skill is most integral to your random competition, but they’re gonna win?

That’s what Luka Doncic is. He’s amazing at basketball — but he’s the best at things.

If you’re still not sure what I mean, look at the clip above. Has ANYBODY, in the history of basketball, ever practiced that shot? No, that would be a waste of time. But Luka has that one in his bag anyway, and he swished it when his team needed it most. Watch this one from his rookie year:

What the fuck was that shot?? That was a push shot for 3! Watch this one:

Luka Doncic is so exciting to watch because his skill almost seems to transcend basketball — he looks like a magician on the basketball court. He’s not always killing you with the same set jump shot every time, or the same practiced dribble move — he’s doing random shit and just making it work (sometimes, he does kill you with the same practiced moves over and over. But that’s not what I’m discussing). While many skills make up the masterful abilities of Doncic, it’s his touch that makes him magic.

If you’re unfamiliar with the term “touch” in this context, I’ll do my best to explain it, because I’m struggling to find an academic biomechanical definition online. “Touch” is an almost ineffable quality, referring here to someone’s ability to put just the right amount of force on an object to achieve the minutest details of their athletic goal. Does that make any sense? So it’s not the accuracy of a pass, it’s the way the ball slows down to land softly in its receiver’s hands. It’s not the speed of the bowling ball, it’s the spin that allows it to hit the pin at just the right angle.

“Touch,” in my definition, also has to do with compensating for random body or circumstantial effects that might mess with an ordinary throw. For instance, in the first clip above, Luka is diving forward, so as he shoots the ball, he changes the amount of force he applies — if you slow it down, you’ll see he moves his arm almost straight up, even backwards a little, and allows his body’s momentum to carry the ball to the hoop. In the second clip, he’s falling to his right, so you’ll see his arm move to his left as he shoots, remaining perfectly perpendicular to the ground at release. He makes these awkward shot motions — totally different from the one he’s practiced from adolescence — and he just does it by nature.

Obviously Luka’s shooting, his court vision, his strength, his passing, his “basketball IQ” — these all make him the NBA superstar that he is. But if you look at the details of his game, you’ll see his spectacular touch laced throughout. (I also think his touch is why he shot better on step-back threes (36.5%) than all threes (32.7%) his rookie year (the only year I could find his step-back-specific percentage (sorry for all the parenthesis).).).

This pass stood out to me during the Japan vs. Slovenia game, even though it didn’t end up being an assist. Luka throws it really hard — but really accurately. On release it looks like it might fly off target due to how hard he throws it. But the way he flicks his hands to spin the ball in such a way that it doesn’t fly too high or too low, without having to sacrifice velocity, is just yet another example of the advantage his touch gives him.

I’m not a scientist, and my rough sports-based definition of touch can’t even begin to explain what it really is. It’s some sort of combination of innate balance, body awareness, and muscle control that combine to make what looks like magic. Its indescribability is what makes it seem like Luka is just a natural at everything.

There are certainly other NBA players who flash this skill. Trae Young rode his soft touch floater deep into the Eastern Conference playoffs this season. Richaun Holmes uses his to cash in on basketball's most unique shot. Touch shows itself most in floaters and pass accuracy, so players who succeed at these tend to have good touch. Like with any basketball skill, you could list from elite to non-existent the tiers of ability among players in the league. It’s tough with such a nearly intangible skill to make a definitive list, but no matter how you make yours — Luka should be at the top of it.

There’s certainly a scientific way to explain Luka’s supernatural “touch” — but until somebody nerdy does the research, I’ll continue to call it Luka Magic. Or just, being good at things. 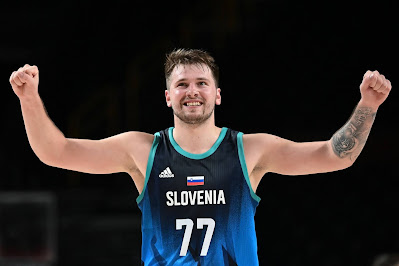