Ringer The Stamp of Approval - Jaden Springer: Reporting for Defense - by Sam Butler 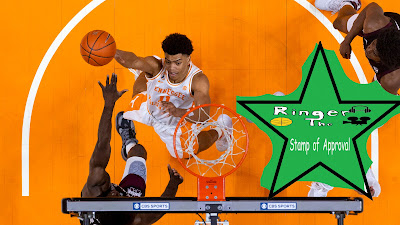 Welcome to Ringer The’s pre-draft series: The Ringer The Stamp of Approval. Over the next few weeks leading up to the draft, we’ll give you a breakdown of who we at Ringer The think is poised for success and show which prospects have earned our coveted “Stamp of Approval.” Next up: Jaden Springer!

When I watch Jaden Springer play, I see Jrue Holiday. And I mean that in both the good ways and the bad.

Defensively, that’s a massive compliment. Jrue Holiday is one of the (if not the) best on-ball defenders in the league. Jaden Springer will have to work hard to earn that reputation, but in his time at Tennessee he’s shown the physical and mental tools to become that type of defender.

Offensively, the comparison isn’t a slight, but it’s not glowing praise either. Springer has a lot of offensive talent — he can pull up from mid-range, he can finish through contact, he can make the right pass in pick-and-roll — but, like Jrue, his ideal fit isn’t running the show as your go-to guy.

The comparison largely has to do with their physical attributes as well. They’re both on the smaller side — Jrue is 6’3” with a 6’7” wingspan, and Jaden is 6’4” with a 6’7.75” wingspan. When attacking the basket, they both almost always jump off two feet, and almost always finish with a lay-in rather than a dunk. Neither seems particularly shifty with the ball in their hands — but they somehow have the agility to keep any ball-handler in front of them. They’re both strong for their size — bullying defenders on their way to the basket rather than trying to evade them. And they both like to try spin moves on their drives.

If Springer truly does take after Jrue, though, the defense is what will separate him from the rest of the guards in his class.

Springer is an extremely talented and versatile defender, both off- and on-ball. Despite his smaller stature, Springer has the ability to guard 1–3 (and some 4’s — maybe even 5’s in a pinch) due to his impressive strength. He’s not afraid of contact — in fact he often seeks it out, which helps him corral offensive players and keep them off-balance.

Off-ball, Springer makes up for his smaller size by always being in the right spot at the right time. He is an active help defender when he’s stationed on the weakside, and he clearly understands his limits as he makes smart gambles to generate steals, while rarely getting burned. Springer also shows a fantastic ability to closeout quickly while maintaining balance and keeping the shooter in front.

Here we see a good example. Springer is pulled in all the way into the paint on the weakside, staying active and ready as a help defender. When the skip pass flies over to his man, he closes out quickly to deter a shot, communicates to his teammate on the wing to stay put, and manages to keep the shooter in front of him all at once. Then, he uses his strength to contain a wing with a size advantage and force a miss.

This play is less eventful, but we see the same off-ball attentiveness shine through. As the Tennessee defense is scrambling back to get set, Springer is paying attention to both the ball and his man, nearly tipping a pass before recovering to the shooter quickly. He shifts in response to the jab step, but still manages to contest the jump shot at its highest point. He then makes the heads up play to leak out and turn defense into offense.

The hard-work shines through when Jaden Springer is playing defense. When a shot goes up, he always turns to find a body to box out. He visibly communicates to his teammates when he’s helping, and he rarely gets caught sleeping. He does everything you look for off-ball — but his on-ball defense is where he really shines.

LOOK AT THAT! He blindly navigates the screen twice as if it’s not even there, he keeps his hands up to avoid fouling, and he slides his feet at lightning speed to keep the guard in front of him before erasing the shot attempt.

On this play scrambling back in transition, Springer spins around without losing any speed, locks onto the ball-handler, and identifies the perfect moment to poke the ball free. His balance really shines on this clip — his ability to thread the needle to poke the ball out without fouling while backpedaling is so impressive it takes a run-on sentence just to describe it.

Springer’s defense on the ball separates him from every other guard in the draft. His combination of lateral agility, balance, and strength give him all of the physical tools he needs to contain elite ball-handlers despite his smaller size. He has elite timing with his steal attempts, which allows him to generate steals without fouling. Here’s another good example just for fun.

Let’s move to offense. Springer has something of a “jack of all trades, master of none” offensive skillset. At Tennessee the offense never ran through him, but he played his role well as a secondary creator, showing playmaking skills, tough finishes, and efficient shooting from deep.

Above is a compilation of some of his more impressive drives, which shows what he hopefully could become as a driver in the NBA. In college however, most of his drives were not quite as pretty. Springer often made his way into the paint with just brute force, resorting to backing down his defender quite often. Once in the paint, though, Springer could make things happen. Springer is a patient driver who can make the smart pass or gradually bully his way to the rim, and has a very effective jump stop as a last resort. He can also finish through contact:

Springer almost always generates contact on his drives, using his strength advantage to clear out space. His height may make finishes like this tougher at the NBA level, but Springer’s touch on his short jumpers and floaters gives me hope that he can become a versatile enough finisher to survive the NBA. And his ability to draw fouls (his .439 free throw rate would’ve been 3rd in the NBA for guards) should translate nicely thanks to NBA whistles that tend to benefit smaller players. Especially considering that based on the clips in the above compilation, SEC referees don’t know what fouls are.

Springer took fewer than two three-pointers per game in college, but shot an elite 43.5% on them. A percentage that high may not be replicable in the NBA, especially on higher volume, but Springer’s shot form looks good (if a little slow), and his shooting should be enough to demand respect from defenders. In the above clips, Springer shows that he can do more than relocate and spot up for threes, he can also make a move to avoid a close-out and still knock them down.

A realistic offensive role to start his career may be as a floor spacer, and Springer has the shooting, driving, and basic pick-and-roll ball-handling ability to thrive in this role — it may even be ideal. Whenever he’s forced to make a quick decision, Springer often makes the right one — it’s when he’s taking his time at the top of the key that he may stall the offense a little bit.

Defensively, my only concern is that his size and need to load up before jumping may cause struggles. As for offense — his size could be a real problem for his finishing in the NBA. In addition, due to his lack of creativity as a ball-handler, he will be limited to at most a secondary creator role at the start of his career. I’d also like to see him try to get to the rim more often — many of his drives at Tennessee stopped short for a floater or free throw line jumper.

Like I said though, attacking closeouts and making quick reads is what he can do best. He’s good-not-great enough at everything offensively to get by, and full-on great enough at everything defensively to thrive. And I’m hopeful that he finds his offensive niche and makes strides to improve during his rookie season. He is one of the youngest players in the draft — a full year younger than Cade Cunningham — so he will of course have time to improve.

He may not be the Rookie of the Year, but with playing time, Springer’s elite defense and efficient complementary scoring potential will shine through, and he could end up (fittingly) as a steal in the 2021 draft.