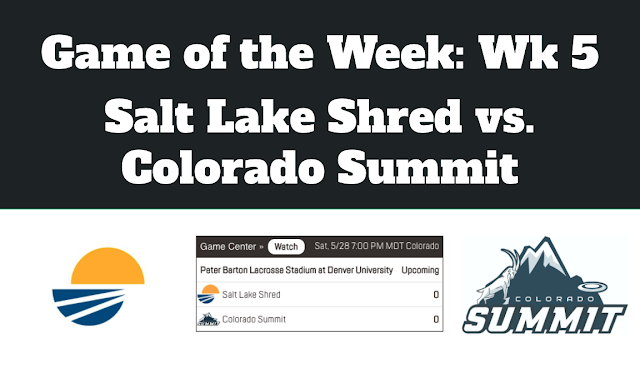 The Salt Lake Shred and Colorado Summit will meet in a battle of the un-beatens this weekend, as the two top teams in the West will play for the first time Saturday night. The Shred (3-0) boast victories over the Growlers, Aviators, and Cascades this season, and have scored a league-best 27 goals per game in those wins. The Summit (2-0) have perhaps the more impressive win on their resume with a one-point victory over the Portland Nitro, in addition to a win over the Cascades.

Saturday night's match-up will mark the first home game in franchise history for the Summit, who joined the AUDL this season along with the Shred. Another win this weekend would bump the Summit to 3-0 for the season, taking them to the top of the West standings.

An important factor to note coming into this Memorial Day Weekend match-up is the scheduling conflict with D-1 College Nationals. Both teams expect to be missing key pieces. The Shred's Garrett Martin, who has played the second most points this season for Salt Lake, will be at Nationals with Utah State. For the Summit, O-Line contributors Alex Atkins and Thomas Brewster are both rostered with Colorado for College Nationals.

The absences will put more pressure on the teams' older top-end talent - and thankfully both franchises boast some of the league's best. The Summit, of course, are enjoying the play of 2017 AUDL MVP Jonathan Nethercutt, as well as longtime LSU and Wind Chill standout Tom Echols and former First Team All-AUDL player Jay Froude. The Shred's core is made largely of elite talent out of BYU, including 2021 All-Rookie First Teamer and current AUDL +/- leader Jordan Kerr.

Despite players missing for College Nationals, this game has the talent to ensure an enthralling match-up. The numbers, for the most part, favor the Shred at this point in the season. The Shred are one of the league's best hucking teams, with 72.5% completion on 9.67 hucks per game. Their D-Line conversion rate of 54.35% dwarfs the Summit's mark of 33.3%. It's possible, though, that the stats only favor Salt Lake due to a favorable schedule to start the season. The Shred's win over the Growlers has been their toughest test thus far - so the undefeated Summit could present a new level of challenge for Salt Lake.

The one key area where the Summit have the advantage is blocks per game - they've managed 13.5 per game to the Shred's 10.3. Against an efficient offense like the Shred's, who have the third best O-Line Conversion rate in the AUDL, generating blocks will be the key to winning this game. Generating blocks has been a group effort for Colorado - no player on the team has more than five thus far. Look for Alex Tatum and Cody Spicer to step up on the defensive end; the result will hinge on the ability of those two to get blocks.

This Salt Lake and Colorado match-up will be a must-watch game for any AUDL fan. This could be a preview of the West division's championship game - so expect these teams to show out against one another.