Why We Listen to BROCKHAMPTON and Why You Should Too: An Acrostic, by Joe Maher 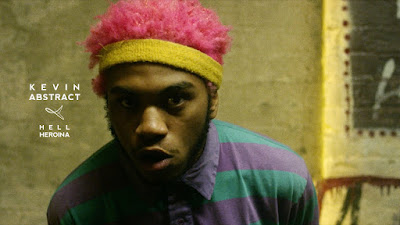 BROCKHAMPTON – A high energy, low cost, high functioning, low hate, high potential, low risk, highly skilled group of lowly Kanye-fanning forum-loving rappers. Now if that tag line didn’t hook you, you just don’t know music.
This isn’t a biographical piece. It’s not even a review piece. This is a piece roughly outlining how if you aren’t listening to this band, the band that was given the title “The Best Rap Group Since the Wu-Tang Clan” … by me … once, then you need to put this article down, plug in your headphones to your phone, computer, Walkman, or whatever you listen with, turn on Spotify, Apple Music, YouTube, or whatever you listen to and absorb the genius that is BROCKHAMPTON.
For those of you still reading this article, I assure you that everything you need to know about this group is coming up. If you imagine for a moment that a saner Odd Future meets the beat making of a saner Kanye West, meets the lyricism of a saner Eminem meets the fun of a much more insane De La Soul, you will start to see an inkling of the creativity behind the self-proclaimed “boy band” and in an effort to match that creativity, I present to Ringer The:
Why we Listen to BROCKHAMPTON and Why You Should Too: The Acrostic
B - Bear with me. I know I said that this wouldn’t be a biographical piece, but every good hero needs a backstory. So, here is how BROCKHAMPTON’s Uncle Ben died, Spider-Manically speaking. The leader and creator of the group is a rapper named Kevin Abstract and in his own words he created BROCKHAMPTON because he “had no friends.” So, he visited the Kanye West online forum, KanyeToThe, where Kanye West fans talk about literally everything from Kanye to conspiracy theories. He sought out other talented young people and over time the group was formed. Who are the other members of this internet-savvy cluster you ask? First of all is rapper Ameer Vann, whose mustache brings BROCKHAMPTON’s classiness to a new level. Then there is Merlyn Wood, an odd, energetic, skinny guy who sometimes decides that he has a Jamaican accent. Next is Dom McClennon who makes any syllable sound good coming out of his mouth and can rock blue face paint like no other (See the STAR music video). The final rapper is Matt Champion, the resident white guy. They also have a singer, JOBA, who looks like the result of one of the Hansen triplets from Slapshot joining Metallica.
Together they all moved into a house in San Marcos, Texas where they dropped their first mixtape, All-American Trash. After gaining a small foothold and some following, they created their first album which released last month called Saturation. The group plans on releasing their second album in August. Yes, AUGUST! As in, one month! Finally, the lowly Kanye-fanning forum-loving group will go on tour as a collective for the first time.
Phew, alright. Now to the fun stuff.

R - Record Label. Or, rather, the lack thereof. The group isn’t signed under anyone currently despite their growing popularity. To BROCKHAMPTON (also wait, before I get to that, I’m gonna start calling them BROCK because the full name is too long), being signed to anyone limits their creative spectrum and lets someone else make money off of their creation. Think Melo under Phil Jackson. This is how they get away with things like screaming, “I’ll break your neck so you can watch your back.” But beyond just all too vivid threats, it gives them the ability to create any image they want of themselves.
O - Optimism. This is how I feel when listening to BROCK. Oh, there’s something you should know, frontman Kevin Abstract is gay. He only recently came out, though. His solo album that came out in 2016--which I also heavily recommend--deals a lot with him coming out to his family and being gay in general. His story of being black and gay and coming up to create something so beautiful is a great story. Sounds a lot like Moonlight, but in my opinion La La Land still got robbed. What can you do?
C - Consistency. Okay, if you continued to read this article but have never heard of this band that’s okay. Here is where I’m going to describe their music. They do everything from rap to sing. Their sound reside on a spectrum of thugness from Waka Flocka Flame to Paul Simon. Their songs are about anything from love to murder. No matter what you’re into, just like your local corner deli, BROCK will do it well.
K - Keeping a gold chain on my neck. I have been known to be described as being as fly as a jet and if I’ve said it once, I’ve said it a million times, you must treat me with the utmost respect.
H - How can someone be this goddamn cool? Besides the lyrics of their songs, this is the only thing I think about whenever I watch one of their videos. Like, how can someone be so creative and dope and I’m just here writing for an online website for absolutely no pay. Cough, Sam, cough. Sometimes I really do wish that I was a lonely, Los Angeles, seventeen year-old who left home in search of some online friends to start a band with me.
A - Any Emotion. The group has the ability to create any emotion with any song. If you’ve ever felt sad, happy, angry, or hyped (see the Game of Thrones Season 7 Preview for that emotion) you’ll feel it on this album. Saturation and All-American Trash took me on the joyride of emotions of my life. It’s like your favorite midday spanish soap opera, but on steroids.
M -  Masterful, Mysterious, and Mesmerizing videos. Even before the release of their debut album they had released five music videos and each one was… FUCKING… NUTS. Like actually so crazy. In one, everyone looked like they belonged to the blue man group and in another the last minute of the video involves everyone looking at their feet and swaying back and forth. Some real Blair Witch Project crap. There’s no shortage on baby masks or giant pencils either incase you for some reason were curious about that. Dissected in this way, they come off seeming like a bunch of sociopaths came together to get their dark emotions out in a somewhat-socially-acceptable way. But, when taken as a whole they seem like somewhat-sociopathic who create genuine videos that are completely socially acceptable
P - Personality, or better yet Pizzazz. First of all, who decided pizzazz would be spelled that way? I’m not saying it shouldn’t be, but it makes me hungry. Really though, this is what BROCK has. They have genuine pizzazz and a love for what they do. It’s reflected in their songs, videos, and lives. Each of the members (there’s fifteen including producers, designers, managers etc.) bring something different and they mash up together to be something great. This is what makes BROCK, BROCK.
T - Their songs are bangers. Like every single one. Just listen to any song on Saturation. Aux cord recommendation is STAR, trust me it’s a good song.
O - Okay, if nothing else has gotten to you, look at their lyrics and think about their talent. In one song they shout out these celebrities:
Matthew McConaughey, Tony Perkis, Jason Bourne (Legend), Jason Statham, Liam Neeson, Leather Face, Bruce Bell, Tobin Bell, Anthony Hopkins, Molly Shannon, Sea Buscuit (yeah, Sea Buscuit the horse), Tobey Maguire, John Wick, Chris Paul, Blake Griffin, Robert Horry, Barack Obama, Tom Hanks, Secret Agent Cody Banks, Nicolas Cage, John Travolta, Brad Pitt, Prince, Lionel Ritchie, Tom Cruise, MJ, Kobe, Beyonce, Jay Z, Justin Timberlake , Heath Ledger, Shawn Mendes, Ice Cube, Chris Tucker, Michael Cera, Jonah Hill, Leonardo DiCaprio, OJ (Every good rap song references OJ. Backstreet Freestyle, Stronger, Actin’ Crazy, Natural Born Killaz).
N - Now that you’ve read this article it’s up to you. Well, that area of the acrostic is pretty self-explanatory. I can’t make any of you actually listen to BROCK, so it’s up to you if you take my advice or now. This band was made with the idea that they would be able to create something great. Honestly, they might not even be real and are just a government experiment. I mean who would really cover themselves in blue paint and throw orange juice in their face just for a music video. I guess BROCKHAMPTON is who.

Damn, I didn’t realize how many letters were in the name BROCKHAMPTON when I pitched this idea to the Ringer The Board. But anyway, for a self proclaimed “boy band” who started out because of a lonely rapper and references Secret Agent Cody Banks and lives in the middle of nowhere Texas and at times sound like a bunch of clinically insane alcoholics, they sound really fucking good.