A Game in the Life of Juan Toscano-Anderson, by Sam Butler

A Game in the Life of Juan Toscano-Anderson 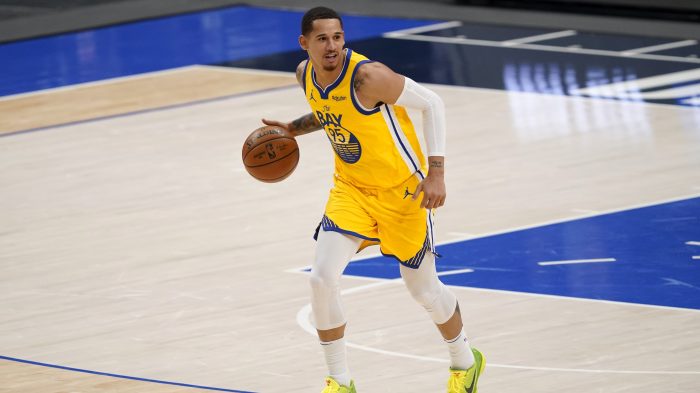 This is probably the most notable play that Juan Toscano-Anderson has made this season.

On this play, Toscano-Anderson dives for a loose ball and flips it back inbounds to a teammate, gashing his head in the process (luckily, after missing just a few games he was fully healed).

This play was important and exciting since it led to a big three in a close game — but it isn’t notable in the same way that the plays his teammate Steph Curry makes are. JTA doesn’t have the talent to make flashy plays like that — which is no knock on him, few people in the world do. The notability of this play is that it showcases an elite talent JTA does have: his effort level.

If you spend a Warriors game solely focused on watching Juan Toscano-Anderson (and that’s exactly what I did, and why I’m writing), you will be blown away by the level of engagement and effort that you see. JTA lacks a lot of the flashy, natural talent you see in some NBA players — he’s a role player for this year’s Warriors team and his limited skillset is the reason for that. But the second-year player is more than just a role player: he is exactly what an NBA role player should strive to be.

He doesn’t make many glaring mistakes, and he brings effort on every play. His body language is impeccable — his head is always up; his movements are quick and purposeful. He always looks excited when the Warriors make a big play, and he always helps his teammates up. His value, though, is more than his body language and energy — and it was on full display in his 5 point, 7 rebound, 5 assist, and 4 steal performance on Monday night.

Offensively, JTA usually finds himself as the fourth or fifth scoring option on the floor. Many possessions he’s stationed in the corner as a floor spacer, but he’s always paying attention as he does — he’ll occasionally make timely basket cuts to give passing options to driving teammates. JTA also often operates as a screener and dribble-handoff partner to Steph. Here are a few of his scoring plays from last night’s game:

In the first clip above, JTA pulls a move that Draymond often uses. Faking a handoff to Steph Curry, JTA waits for Favors and O’Neale to start worrying a little too much about a potential Curry three-pointer, and at that exact moment explodes to the rim for an easy dunk.

In the second, JTA is waiting in the corner for a spot up three off the catch — but look at his body language. Before the catch, he’s squatted with his hands up, ready to catch and shoot as fast as possible. After the shot, he leaps with excitement — that kind of stuff is just so fun to see.

In the third clip it’s actually Steph Curry who scores, but JTA times a sneaky baseline cut at the perfect moment, so that if Steph had been dissuaded from shooting by Favors’ contest, he could’ve made an easy pass to a wide open JTA under the hoop.

I only included two clips of JTA shooting because…he only took two shots in Monday night’s game. Juan Toscano-Anderson is the furthest thing from a ball-hog — he shoots maybe less often than he should — but when he does shoot, he makes the most of it. JTA is 8th in the league in eFG% at 69.9% and 15th in 3pt% at 45% among qualifying players per CleaningTheGlass — though admittedly on very low volume.

One reason JTA doesn’t shoot very often is because his first look when he catches the ball is usually to make a play for a teammate. Passing might be JTA’s best offensive skill — he can make things happen as a roller or as a release valve when Curry gets trapped.

Not all of these passes led to makes, but JTA shows an impressive ability to suck in the defense and make a quick read and good decision with the ball. The pass in the second clip, to a cutting Bazemore under the basket, is a flashy pass JTA has made a few times this season, usually leading to easy points for the Warriors. In the fourth clip, you can see him celebrate the three before his teammate even shoots — the body language again!

On defense, Toscano-Anderson is versatile, aware, and always working hard. He’s big enough that he spent time on centers Derrick Favors and Rudy Gobert, but mobile enough to guard the shifty Jordan Clarkson and forwards Bogdanovic and Ingles at times. Throughout the game, JTA was always rotating on time and making smart switches, taking away easy looks for the Jazz offense.

These clips help showcase JTA’s versatility. In the first one, JTA harasses Joe Ingles all the way up the floor, and when Ingles gets rid of the ball and moves to the corner, JTA displays his awareness by seeing the Clarkson drive and getting into position to be able to contest without fouling, forcing a pass. In the second clip, JTA is able to stay in front of the speedy Clarkson and prevent him from getting a clean look. And the last two clips show JTA’s ability to navigate pick-and-roll defense, switching in the first clip and dropping in the second, coming away with a steal both times.

At the end of the day, as a role-player, JTA still has his flaws. He’s not as strong as the bigger centers he matches up with and can end up ceding rebounds to them even if he does box out properly. When matched up with shooters, he has a tendency to bite on pump fakes, he did so twice in this game leading to blow-by’s. He’s an imperfect defender — every player is — but his lapses are rarely in effort.

Beyond his basketball skills, I just can’t get over his body language. When you really pay attention to him, it feels like you can watch his mind churn. He’s reading the game, understanding what he needs to do or where he needs to be, getting there and doing it. And when plays are over: he’s celebrating, he’s hyping his teammates, he’s doling out high-fives and chest bumps.

It’s little things. The way he will full-on sprint just to go set a screen. The way his head swivels on defense as the play develops. The plays where he flies in from out of nowhere to try to get a rebound he has no business being close to.

In a year where most discussion about the Warriors has been focused on the struggles and flaws of Steph Curry’s supporting cast, JTA provides exactly what a contender would want in a role player.

He too has his flaws of course — he can be a little too passive, looking to pass first when he has an opportunity to drive or shoot. He also doesn’t really leverage his shooting ability into drives against hard closeouts. He has his flaws on defense too — and with the range of players he guards, he should be expected to.

But for a role player, JTA brings the energy, effort, and talent needed to succeed. The hustle, the flashes of passing talent, the shooting efficiency and the defensive versatility should help JTA have a long, successful NBA career — where he will hopefully become much more than a role player.