Ringer The Stamp of Approval - Sharife Cooper: Not Large, but in Charge - by Sam Butler 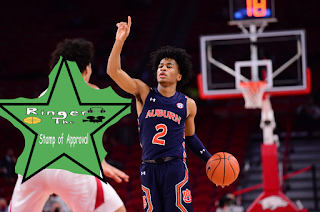 Welcome to Ringer The’s pre-draft series: The Ringer The Stamp of Approval. Over the next few weeks leading up to the draft, we’ll give you a breakdown of who we at Ringer The think is poised for success and show which prospects have earned our coveted “Stamp of Approval.” First up: Sharife Cooper!

It may be in part a result of watching 6’1” Trae Young tear his way through the NBA playoffs, but I’ve recently come to fall in love with 6’1” 2021 NBA Draft prospect Sharife Cooper. I don’t mean to say that Cooper is at Young’s level as a player (yet), but Sharife Cooper’s game (despite some flaws) has what it takes to one day be a star at an NBA level. Watch this clip.

I don’t care about the dribble moves - look how he gives the side eye to his defenders after he embarrasses them. He’s so cool!

Cooper is cool - and it’s not because of some intangible ‘cool factor.’ It’s because he is in total control of the game when he’s got the ball in his hands. He has instincts for reading a basketball court - he makes things that even some experienced NBA vets can’t do look natural. A lot of the best point guards in the world are masters at reading a defense and making the correct play - but Cooper does something even more rare. If you watch him closely, he’s controlling where the defense goes, orchestrating openings, and exploiting them. He’s creating the reads he wants. He’s in charge.

Cooper did most of his damage in college out of the pick-and-roll, much like we watched Trae Young do this postseason, and much like Trae Young, he was able to do so because he had multiple ways to attack at every moment. But while Young leverages his shooting to create these looks, Cooper utilizes his rim pressure and exceptional vision. Cooper can see every player on the floor, and the defense has to be prepared for him to hit the roller on a pocket pass, throw a lob, throw a skip pass, hit a floater, or drive hard to the rim at all times. His ability to get by perimeter defenders with ease enables him to get into advantageous situations often, at which point his elite vision shines. He can make almost any pass you could imagine to turn those advantageous situations into an open shot attempt.

In the clip above, though the plays are not identical, you’ll see very similar processing happening by both Trae Young and Sharife Cooper. Both players are reading all five defenders on the floor, both players throw in minute jabs and headfakes to freeze or move help defenders, and both ultimately open up their teammate for an easy alley-oop.

Cooper runs an offense so well because he’s a proactive (as opposed to reactive) playmaker. He’s making the defense move where he wants, and then making the best play accordingly. Cooper has a great handle and elite quickness - he’ll split double teams or get by his defender, and he can comfortably drive into the lane and draw a crowd while keeping control of the ball. He makes really advanced passes regularly, finding the best angle to deliver a knockout blow to a collapsed defense. Watch in the following clips - he’s making the defense move and react with every little fake - then striking.

In transition, Cooper makes a lot of advance passes and always looks to strike in early offense. When he secures a rebound or catches a pass from the rebounder, you can see him immediately turn his head and look for an opportunity to make an outlet pass, like you might see Nikola Jokic or Lonzo Ball do.

As a scorer, Cooper is not afraid of contact - he will initiate contact to create space and get to the line on his drives. But he’s also a crafty finisher and can hit floaters and tough lay-ups around contact as well. Given his size, he’ll need both types of finishes in the NBA, and combining those with his knack for last second passes under the basket should afford him the versatility to succeed amongst the trees around an NBA rim. Below are a few clips from his game vs LSU, where he displayed both contact and finesse finishing.

Now, I did a lot of comparing Cooper to Trae Young earlier. Where the similarities stop between Cooper and Trae Young is the shooting. Trae Young is an incredible shooter from any distance. Cooper...is not.

However, there’s no reason to believe this shortcoming can’t be corrected. Cooper displays incredible touch on floaters and runners, as well as his pinpoint live-dribble passing. In addition, Cooper shot 82.5% on free throws, which is a common measure among draft evaluators for future shooting potential. His shooting form on threes is a little ugly - he barely jumps and he leans back - but NBA coaches can certainly build a jumpshot for a player with such good touch and ball control.

A bigger concern may be his shot selection. Cooper was shooting 4.8 threes a game in college, despite hitting just 22% of them. While they were often open for him, Cooper should have relied more on his elite ability to get to the rim. Cooper shot 46.5% on two-pointers, which isn’t an amazing number, but is just about the same as Cade Cunningham’s 46.1% and is reasonable for a guard with the creation load that he had (Trae Young shot 42.2% on two-pointers during his season at Oklahoma, for reference). A coach who will rebuild his shot and improve Cooper’s shot selection, as well as reduce his turnovers that often came on passes that were flashier than necessary, will be crucial for turning Cooper’s star potential into star production.

Cooper’s defense isn’t as concerning as you might expect for a 6 foot ball dominant guard. When in on-ball defense, Cooper puts his quickness and size to use by getting close and under ball handlers, poking the ball free on occasion. His size and lack of vertical bounce are more of a detriment when it comes to his off-ball help defense. It’s hard to project how active he will be as part of an NBA defense, as Auburn spent most defensive possessions I could find playing zone. But Cooper’s ability to see a few moves ahead on offense makes me hopeful he can hone that awareness to become a positive defender as well. On defense at Auburn, Cooper displayed both engagement and communication, which makes me hopeful for his potential to be at least not a liability on that end.

Cooper is one of those prospects who’s described as having some intangible “it factor” or swagger, but his “it factor” is actually based on his very tangible skills for understanding the game of basketball. He always seems in control on the floor because he is - he’s a few steps ahead at every moment, and is capable of making the right play every time. If Cooper can overcome his size and shooting issues, he can provide star potential to a lucky team with a mid-to-late first round pick.