It's Week 8 - and you know what that means: it's the eighth week of the season! 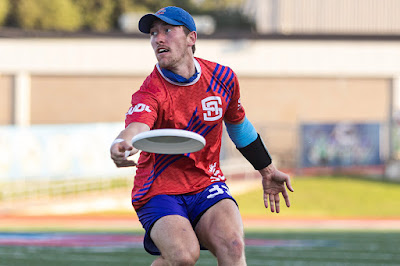 Jake Radack of the Austin Sol either throwing or making a weird catch
Image Source: https://theaudl.com/league/news/2022-audl-players-watch-week-4

While every AUDL game is a treat to watch (AUDL please sponsor us), some will carry more weight than others at this point in the season. In this week's preview, I'll highlight five games I'll be watching to see how the playoff race unfolds.

The Sol are on a road double-header this weekend, with stops against two of the Central division's top teams: Chicago and Madison. The Sol's 3-2 record doesn't do justice to their quality; Austin is the only team to best Carolina this season. Meanwhile, though Chicago is undefeated, their strength of schedule has many questioning the legitimacy of their 4-0 mark.

This match-up will be a great inter-divisional test, giving fans a chance to see how the elite of the South and Central compare. Austin will be at a disadvantage being on a road double-header, but the team still expects to win. 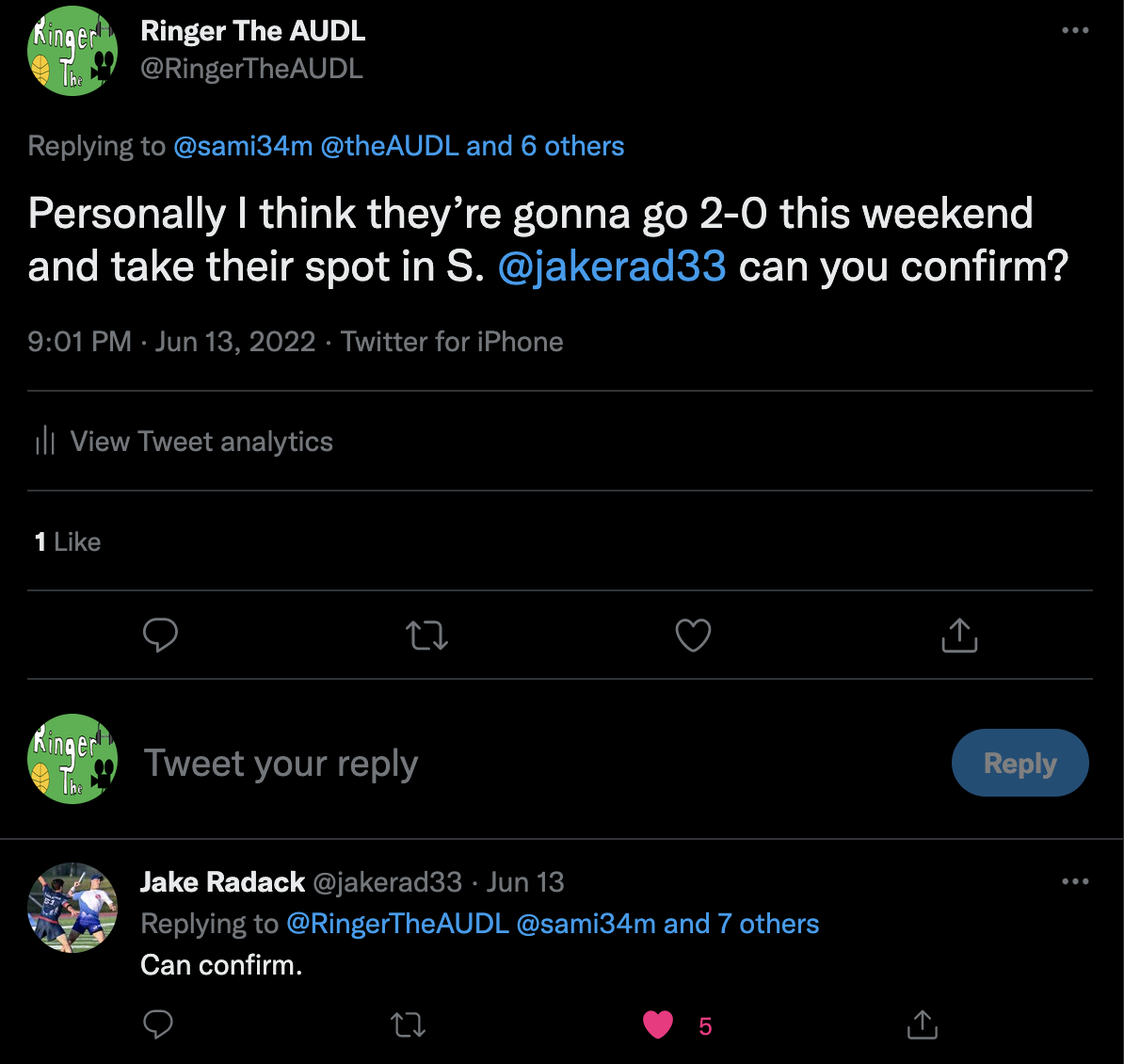 Handler Jake Radack took to Twitter recently, replying to me and saying that he expects to go 2-0 this weekend. Radack, recently named a mid-season contender for rookie of the year by Daniel Cohen, has been key in leading the Sol this season. Radack leads the Sol with 19 assists and 19 hockey assists, quarterbacking their strong offensive attack.

The Union are undefeated for a reason - they're a strong team. But this game will be their first big test, and I will certainly be tuned in.

*bonus: I will definitely also watch Sol vs. Radicals the next day

Any Flyers game is watch-able, they play high quality ultimate. A Flyers game against an elite team: that's a must-watch.

The South division is a three-headed monster, with the Flyers, Hustle, and Sol all showing promising championship potential. Each team's only losses this season have come at the hands of one-another, so the South playoffs will be intriguing without a doubt.

While we wait for the playoffs, this will be a great preview. The Flyers took the Week 1 match-up with Atlanta 16-14, in a low-scoring game that somehow only featured 21 total turnovers. The teams combined for just 11 blocks in the game - as both displayed elite abilities to maintain possession.

Anders Jeungst led the way with a +/- of 7 in the last meeting - but he'll unfortunately miss the rematch due to injury. To take the win again, Carolina's depth will have to shine - luckily they're from North Carolina so they have a ridiculous wealth of elite ultimate players.

On the surface, this game should be a beatdown. The 6-0 Summit have looked incredible so far in their debut season, while Seattle finds themselves sitting near the bottom of the West standings at 2-5.

And maybe it will be a beatdown. Maybe Colorado is really just that good. But I have hope that this will be a competitive game - because Seattle has turned their season around in their last two games.

The Cascades are 2-0 in their most recent two games, taking an 8-point win over the Portland Nitro and a 9-point win over the LA Aviators. This weekend they do face a road double-header, but as the first leg is in Oakland, I expect them to enter the Summit game sitting at 3-5.

There's reason to be pessimistic though. As of Thursday morning, reports indicate Seattle will be without Adam Simon, Declan Miller, and Drew Swanson. Swanson leads the team in both blocks and +/-, Miller leads in total scores, and Simon leads in total assists in only 3 games played.

Meanwhile, the Colorado Summit are coming off a beatdown of the Salt Lake Shred in Utah. Even against a full-strength Seattle team I would comfortably pick Colorado, so with such big names missing we'll probably see the Summit improve to 7-0.

Still, this is a game to watch. Even if it isn't close after all - the Summit play some exciting, must-watch ultimate.

The last time these teams faced off, it was a thrilling 27-26 win for DC. This time, I expect to see DC win a lot more comfortably - and that's precisely why I'll be tuning in.

The DC Breeze have all the makings of an S-tier elite team. Their achilles' heel thus far has been an inability to generate blocks - they're 3rd-to-last in blocks per game, above only winless Detroit and Tampa Bay.

I am DYING to see DC get a 15+ block game, and really make a statement against a Toronto team they should beat. Toronto has an extremely efficient hucking attack, boasting the third best Huck% in the league at 72.15%. An elite team like DC can be should be able to take that away, make Toronto uncomfortable, and take advantage.

The Breeze have comfortable wins over Montreal and Boston to their name, as well as two tightly-contested losses to the New York Empire - results that all indicate they're an elite team. The one real blemish on DC's schedule thus far this season is that one-point win in Toronto.

To establish themselves as an elite squad, DC needs to take care of business in a comfortable fashion against Toronto.

The playoff race is only just getting good - but this game could remove a lot of the intrigue out west. With a win, the Growlers could just about take the Aviators out of the playoff conversation.

LA is 3-3, and sitting at fourth in the West. Since the top three in each division advance to the postseason, the Aviators will need to usurp either the Summit, Shred, or Growlers.

The Summit are almost certain to make the postseason after their 6-0 start. The Shred, at 4-2, look like a near-lock as well, their two losses coming only to the Summit.

The Growlers sit at 4-1. Should the Aviators defeat them this weekend, subsequent Growlers losses to the Summit twice and the Shred (a plausible outcome) would give the Aviators a chance to sneak into the playoffs with a 7-5 record (assuming they take the tie-breaker over San Diego).

A Growlers win complicates things for the Aviators. LA has just 3 losses now - but they have two games against the Colorado Summit left on the schedule, and I wouldn't count on them winning either of those. The Aviators are probably looking at a 7-5 record in their best-case scenario, which makes this game that much more important.

It's an early playoff game out west. Will the AUDL Rookie of the Year favorite Everest Shapiro be able to lead LA to its fourth win in five games? I'll definitely be tuned in to find out.